Tucked far back in a tree lined hill near Cedar Lake in Minneapolis, lies a modern, tree house style home that basks in the glory of it's 1991 redesign. Our task at hand? Take it out of 1991. This site has been setup to take you through the home, step by step, as we begin to renovate and bring it up to speed. 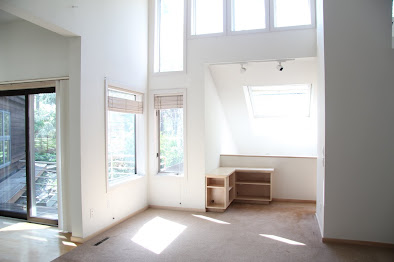 In and Around the Chalet

With the walls completely finished in the front portion of the house we were finally able to rip up the old carpet on the second landing and in the second bedroom, which is my office. We installed a some beautiful (and expensive) New Zealand wool carpets from Godfrey Hirst called “Carramar”. This stuff feels like someone took a flock of sheep and nailed them to the floor. It’s fantastic.

On top of that, I was able to find it at nearly 1/2 the cost of most places from a place in Dalton, GA. Evidently, this is where the majority of carpet from New Zealand comes in and it just so happens that there is a freight train line that runs from Dalton straight to Minneapolis, so for only $25 we had the carpets shipped.

The carpet needed a nice approach to the first stair so I installed a 3″ maple strip so the carpet could tuck up to it so it would have to be rolled over the first step.

With the padding off I went around and fixed any squeaks in the floor. We’re still puzzled what the huge liquid stain on the substrate could have been from.

We installed a different type of carpet in the bedrooms called Godfrey Hirst Glen Abbey.

I’ve learned from experience that you need to stick around when guys are installing things in your house so they don’t ding stuff up. In this case, keeping them from rubbing the underside of the carpet along the freshly painted walls.

So here’s a picture of the gazebo with the twinkle lights on (I have them on a timer).

It only took 2 guys and 2 years but we’re happy to announce the main floor stairs are completely done. We…